Thursday delivered a sweet “two-fer”  to West Coast communities downtrack from proposed crude-by-rail projects.
Following the P66 “No” in San Luis Obispo, Shell oil quietly withdrew its crude-by-rail up in Anacortes, Washington.
Kristen Boyles, an attorney at Earthjustice who represented conservation groups in their legal challenge of the project, called the decision to stop the project an extraordinary victory for the people of Skagit County and Washington state.
“Having a full and transparent public process exposed everyone — including apparently Shell itself — to the risks and harms of this project.”
http://www.seattletimes.com/seattle-news/environment/shell-halts-proposed-oil-by-rail-project-near-anacortes/ 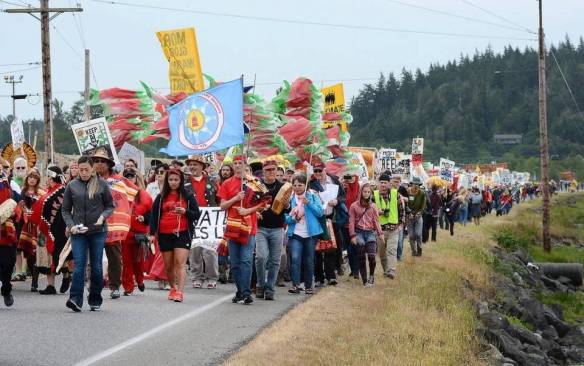 Above:  Protestors march near oil refineries in Anacortes, Washington, on May 14, 2016, as part of a series of global actions calling on people to “break free” from dependence on fossil fuels.  The Shell and nearby Tesoro refineries were the targets of a three-day protest in May. Fifty-two people were arrested and charged with criminal trespass for blocking BNSF Railway lines.  (Photo credit:  Scott Terrell of the Skagit Valley Herald)