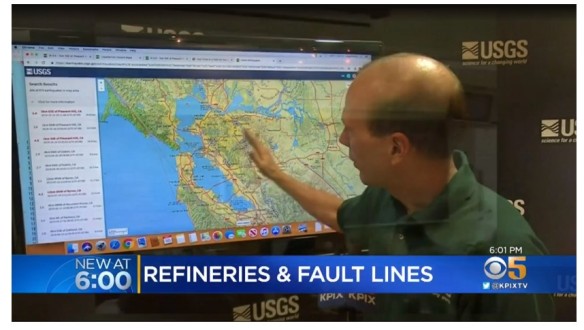 CROCKETT (KPIX 5) — The cause explosion and fire at the NuStar Energy facility in Crockett is still unknown, but on Tuesday it was revealed that the Monday night earthquake in Pleasant Hill was part of that investigation.

Just the possibility of a connection has neighbors of the region’s fuel infrastructure wondering about the seismic threat along this stretch of San Pablo Bay.

“We have the Hayward fault, the Calaveras-Concord Fault, and then we have the Greenville Fault,” explains Brad Aagaard, a Research Geophysicist with the USGS in Menlo Park. “So we have a series of faults.”

The region is, of course, earthquake country. And while they usually happen along those major faults they really can pop up all over the place.

“Really, anywhere in the Bay Area could be right on top of an earthquake that’s large enough to cause shaking and moderate damage,”  Aagaard says.

But the Hayward Fault, suspected to be the most likely source of a major earthquake in our area, doesn’t just run beneath Oakland and the Berkeley Hills. It continues north, and just south of the very infrastructure the region watched burn on Tuesday.

“The Hayward stretches all the way up, and we’ve mapped it onshore, all the way through Point Pinole.” Aagaard says of the fault. “Recent work has mapped it across San Pablo Bay and connected to the Rodgers Creek Fault on the other side of the bay.”

Tuesday’s fire, on the heels of the earthquake, was a second shake-up for people living near the NuStar facility.

“The street, it was blocked off,” says Armon Hebert of Rodeo “You couldn’t get back and forth. Traffic was backed up, a lot of smoke up in the air.”

Hebert saw the aftermath of the NuStar incident on Tuesday. He said the fire and the quake have people talking, and thinking about the neighbors.

“If you have an earthquake and it’s shaking, obviously everybody’s affected,” explained Hebert. “So if anything shakes or rattles or gets too bad, things could happen. I mean we all have to look at that and wonder, ‘What if?’”

The fuel refinery and storage facilities on San Pablo Bay are just some of what straddles the Hayward Fault all the way down to Fremont.

“Those industrial facilities — transportation facilities, electrical utilities, water — all those things cross and in many cases run along the Hayward fault in various locations,” said Aagaard.