EPA also found that Fluid Catalytic Cracking Units at refineries emit more than 10 times more hydrogen cyanide per year, releasing more than 3,000 tons more of this powerful neurotoxin each year than previously reported, and more than one third the combined total of all hazardous air pollutants refineries reported to the Toxics Release Inventory in 2013.

An “unplanned shutdown” …an extremely dangerous situation (pre-explosion) yet no community warning system was activated. Why not?

If you saw the flare, please complain to BAAQMD:  There are two ways to file a complaint:

Seven Groups (including Sierra Club, Center for Biological Diversity and Forest Ethics) say the rules, issued on May 1, would allow the industry to continue to use unsafe tank cars for up to 10 years. 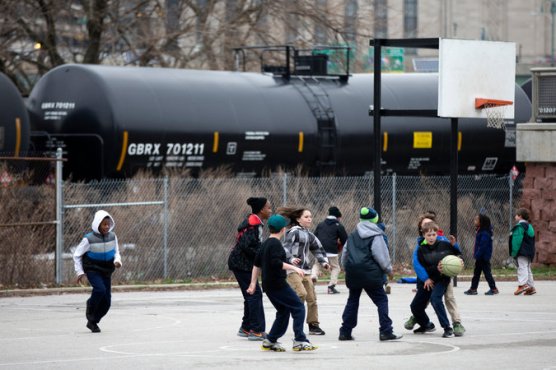 By John Barber (The Guardian, Toronto)

It was bound to happen. Arboreal forests were turned into surreal, toxic moonscapes. Unemployment soared as the capital intensive — not labor intensive — industry got a free ride, thanks to a low, Big Oil friendly tax structure.

Not quite as low as in America, mind you — where oil industry pays no federal taxes, but bad enough to bring dark economic times to a province …. that should have been rolling in the dough.

Looks like folks in Alberta got fed up.  And it looks like tough times ahead for the KXL pipeline and the Enbridge Northern Gateway plan.

From the Nebraska Star Journal (story compiled from wire reports)

The governments of the USA and Canada just proposed in their new “safety” regulations which will conveniently end public disclosure requirements regarding volatile crude oil shipments.

“The transportation of oil by rail can …avoid the negative security and business implications of widespread public disclosures of routing and volume data.”

Heaven forbid we should know what the rolling bomb trains are bringing into the neighborhoods and densely populated urban centers across America.

And really can you blame the Feds for wanting to keep us in the dark?  When people are informed, they fight back, as they did up in North.  Check out this documentary that Bill Maher produced last year.   Welcome to our world.